The effects of the continuing COVID-19 pandemic were of course the main factor impacting the Asia Pacific property market in the first quarter. Signs of the outbreak weighing on sentiment were seen in markets across the region, however robust government stimulus packages and policies are cushioning impacts, and opportunities are emerging across many sectors in the region.

Occupancy rates slide to 50%-65% in Japan amid high supply and tumble to as low as 20% in the Indonesian resort island of Bali; Vietnam sees wave of closures

Coupled with the effects of COVID-19, as well as political and economic uncertainties that affected Hong Kong in 2019, investment momentum remains slow as investors become more cautious and reluctant to take on risks. The upcoming quarter will continue to be a buyer’s market with weaker investment sales; however, discounted assets may create favourable opportunities for investors to reenter the market.

Given India’s robust growth outlook, private equity investment in local real estate is expected to rise in the upcoming quarters, with stronger growth expected compared to other major economies despite the COVID-19 outbreak. A continued pandemic and shutdown could lead to lower real estate valuations, allowing investors an opportunity to look for stressed assets.

The COVID-19 pandemic has impacted the Indonesian economy greatly, with year-to-date real GDP growth recorded at 1% versus a forecast of 5.1%. A weakened currency will provide investors with significant discount-buying opportunities for new and foreign capital entering the market.

Despite global uncertainty surrounding the COVID-19 pandemic, Japan’s real estate market performed well this quarter, with a likelihood of deflationary pressures over the course of 2020. The hotel sector will likely be the hardest hit due to the postponement of the 2020 Summer Olympics, resulting in an oversupply from falling tourist numbers.

The office investment market in Q1 2020 remains stable due to abundant liquidity and low interest rates amidst the COVID-19 outbreak. Office transaction volumes stood at USD1.7 billion this quarter, with the closure of major deals involving Samsung Life Building Yeouido and Namsam Square.

The property market in Myanmar is expected to be resilient, with continued interest in the commercial sector and noticeable shifts towards the industrial segment observed this quarter. Investors have started looking at accelerating the use of automation in logistics and operations and building industrial parks, as well as reviewing land acquisitions.

DBD and CBD transactions were79% and 21%, respectively. The largest transaction – the acquisition of China Merchants Central Plaza by Rhino Capital at USD353 million – accounted for 47% of quarterly transaction volume.

The pace of Philippine economic expansion could be threatened by the COVID-19 pandemic, with some growth estimates for Q1 2020 coming in at 3%. Coordinated policy response from the Philippine government and central bank is likely to instill confidence in the property market before ​ late 2020, assuming the outbreak peaks in H1 2020.

Total transaction volume in Shanghai stood at USD1.1 billion, with resilience evident in the CBD office, DBD retail, and hotel sectors. In the upcoming quarter, Shanghai will remain a favourable market for both domestic and foreign investors with continued focus on income-producing and value-add properties.

Since the introduction of fresh cooling measures in July 2018, the residential sector has outperformed other sectors in ​ Q1 2020 with the tender awards of five government land sale sites. Investors should focus on long-term key drivers and look for opportunities in logistics properties, good quality office buildings, and CBD residential in the aftermath of COVID-19.

Occupational buyers were major contributors in retaining Taiwan’s momentum, particularly in the industrial and office sectors, which accounted for 54% and 31% of total transaction volume, respectively. Interest rates are at their lowest since 2008 and this could provide buyers with great room for negotiation and opportunities for bottom-fishing.

The COVID-19 outbreak has led to a slowdown in market activity, with banks responding proactively to support Thai businesses. Savvy long-term investors are also looking to advance their initiatives in Bangkok at a time where there are fewer buyers in the market.

While Vietnam finished 2019 on a strong note, the COVID-19 pandemic posed a major challenge for economic growth in Q1 2020, with growth rates reduced by around 1% to 1.25% from its 2020 target of 7%. Sectors that were most affected include F&B, tourism, hospitality, transport, agriculture, and real estate.

In the first two months of 2020, strong occupier demand for office space combined with supply constraints resulted in record-low vacancy rates. New leasing opportunities may become available due to the current climate and the office space segment will continue to be a highly attractive asset class.

The COVID-19 outbreak has seen significant disruptions to new acquisition decisions and institutions are undertaking a revaluation of their real assets’ portfolios. Over-allocation to real assets, redemptions, and the denominator effect will be interesting to watch for the remainder of 2020.

Melbourne began the year as the strongest office market in the country, with an average vacancy rate of 3.2% (2% in Prime category). Due to the COVID-19 pandemic, a softening in pricing is expected in the upcoming quarter and investors are anticipated to look most favourably on core assets with defensive tenancy profiles, rather than seeking secondary assets in distress.

Amidst the COVID-19 outbreak, Sydney’s focus in the short term is on the occupier market and how the Australian government’s stimulus package is received. The Australian cash rate saw two 25-basis point drops in Q1 to a record low of 0.25%, which is seen as a buffer for the credit market to provide support to the property market over short- to medium-term.

The COVID-19 outbreak has seen significant disruptions to new acquisition decisions and institutions are undertaking a revaluation of their real assets’ portfolios. Over-allocation to real assets, redemptions, and the denominator effect will be interesting to watch for the remainder of 2020.

Melbourne began the year as the strongest office market in the country, with an average vacancy rate of 3.2% (2% in Prime category). Due to the COVID-19 pandemic, a softening in pricing is expected in the upcoming quarter and investors are anticipated to look most favourably on core assets with defensive tenancy profiles, rather than seeking secondary assets in distress. 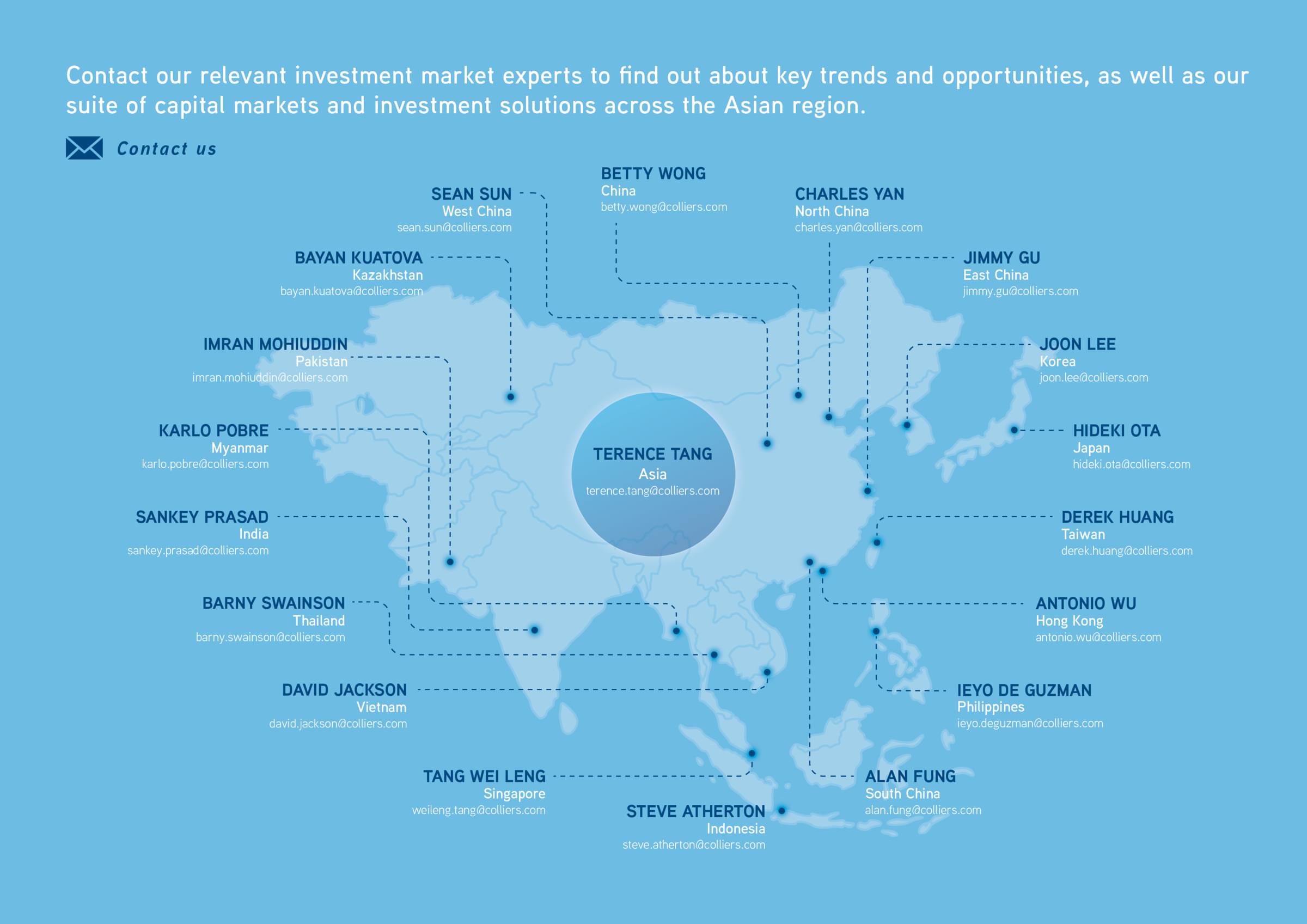 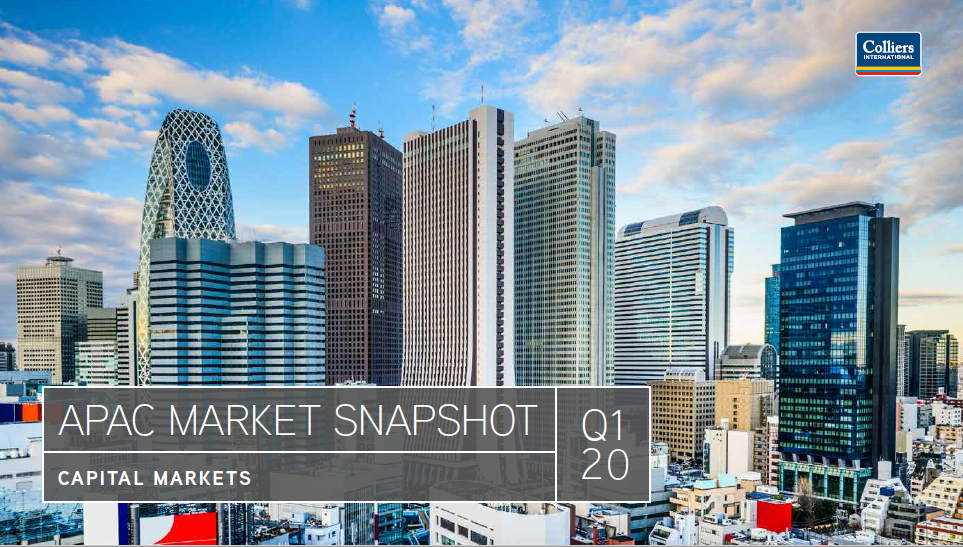 Fill in the form to download the full report 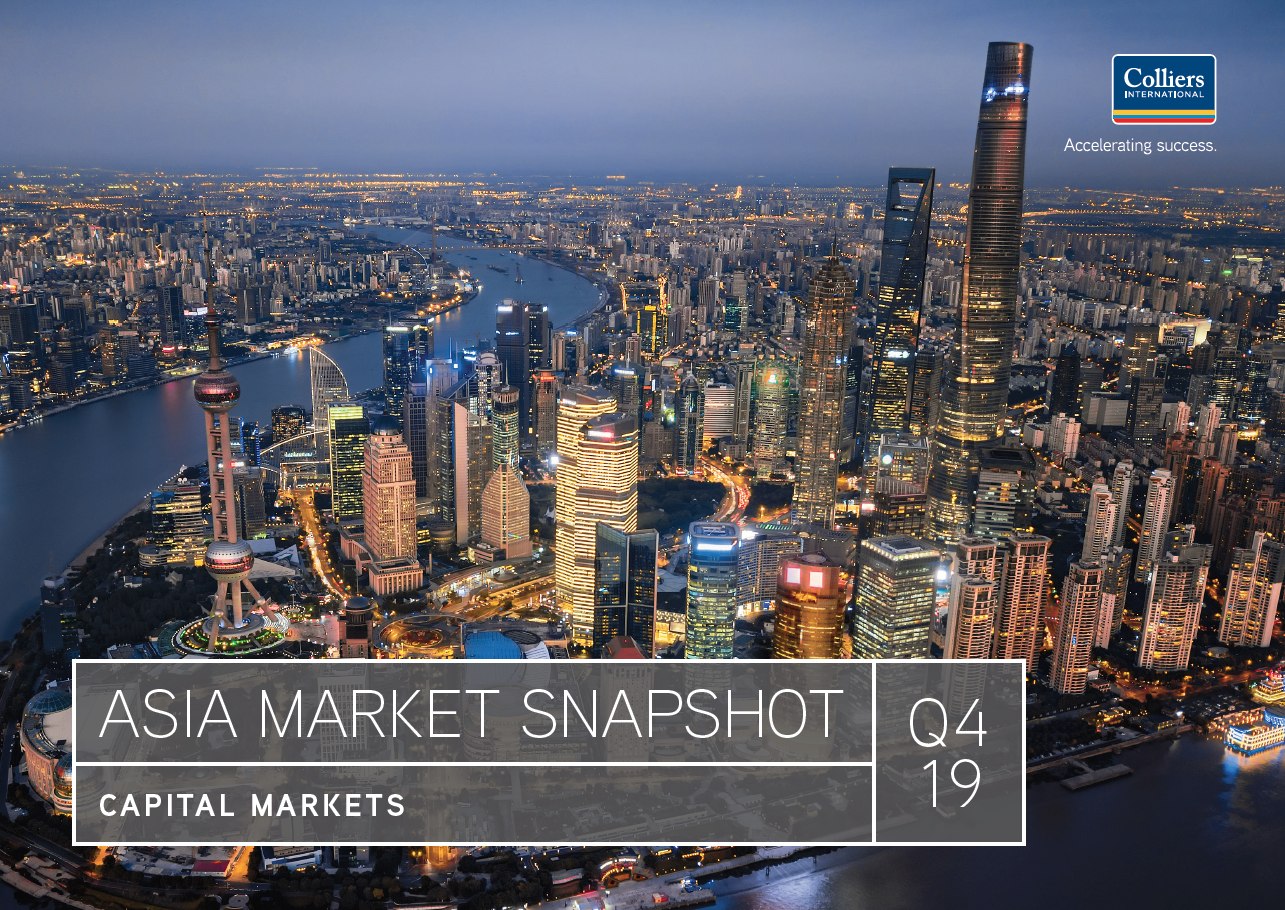 The fourth quarter of 2019, marked by geopolitical uncertainty like the rest of the year, was a mixed bag. 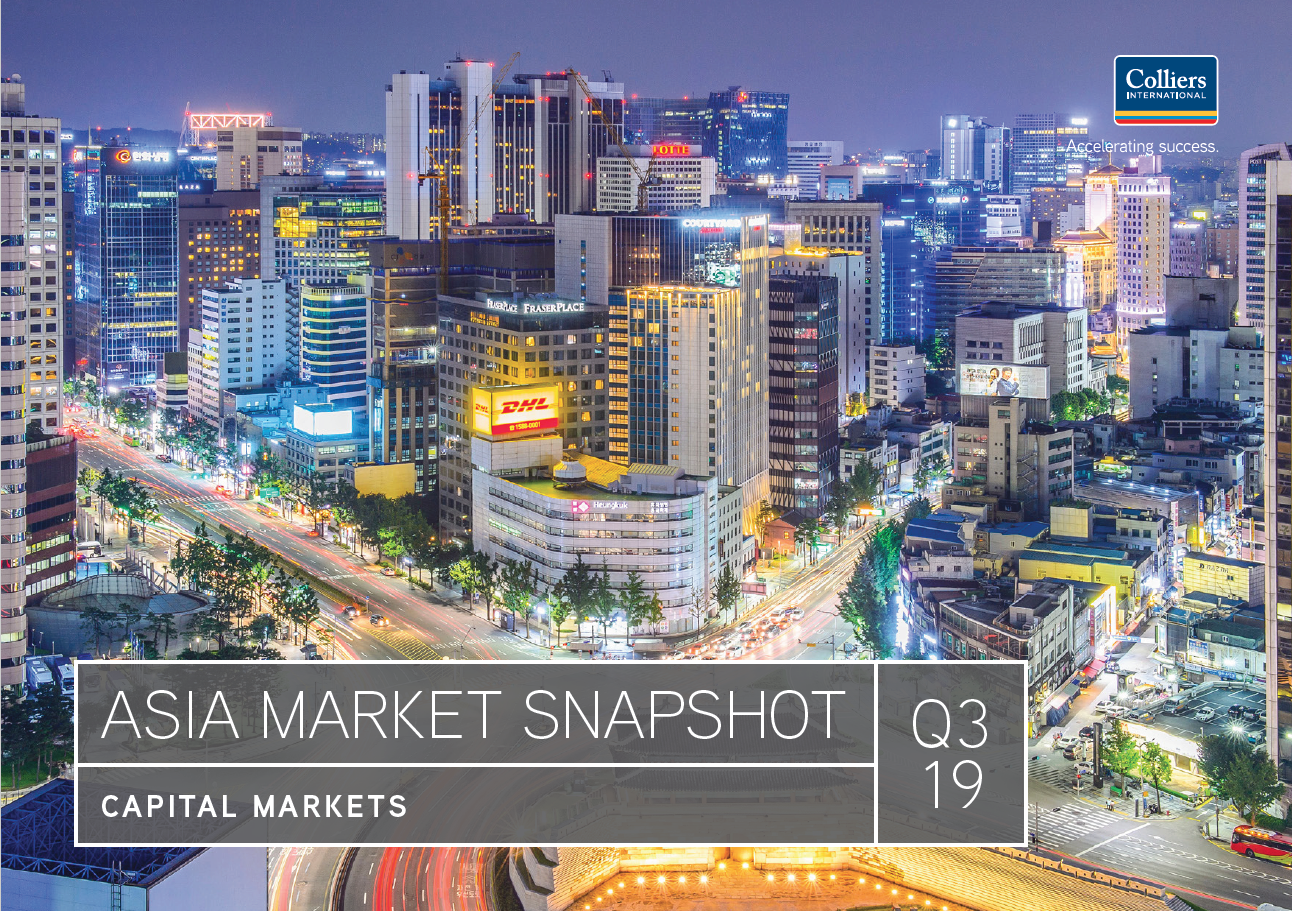 As expected, political and economic uncertainties and persistent trade tensions kept sentiment cautious in the region’s property markets in the third quarter. 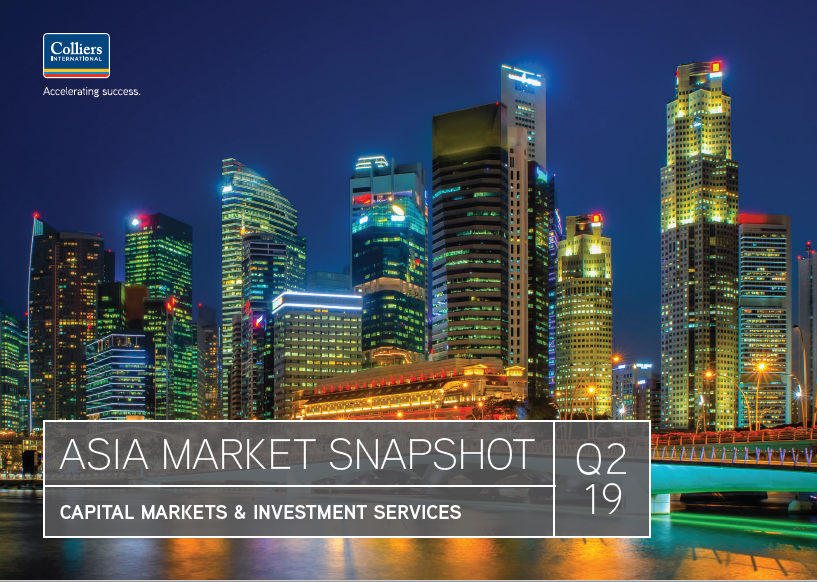 Across the region, investors are taking stock after a politically eventful quarter, which saw everything from massive elections in India and Indonesia to protests in Hong Kong.